The Writer's A-Z of Body Language 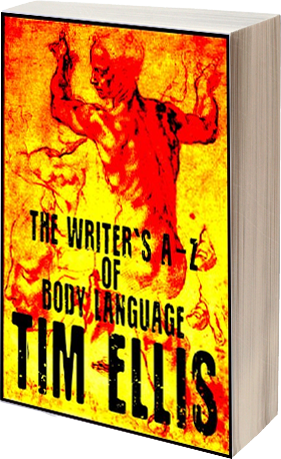 As we know, the use of adverbs is frowned upon in the world of fiction, and looking at someone ‘warily’ is telling rather than showing. Thus, not wanting to be frowned upon, I try not use adverbs. Some obviously slip through the editing and proof reading process, and I apologise unreservedly to my readers for such fictional crimes.

What we need to do is ‘show’ the reader – by the character’s body language – that he or she is wary, or angry, or happy, or any of the other myriad emotions (six primary emotions recognised by all cultures are: happiness, sadness, anger, disgust, surprise and fear), attitudes, and feelings that manifest themselves as non-verbal and often unintended communication known collectively as ‘body language’.

It has been suggested that some of your dialogue tags such as “he said” or “she said” be eradicated through the use of body language, and this will further enable you to add variation to your writing.

Body language (or Kinesics) is communicated from one person to another by means of facial expressions, head movements, eye contact, hand gestures, body positions and actions, tones of voice, and so on.

Generally, as writers, we know (or can have a good guess at) the majority of body language associated with the varied emotions, attitudes and feelings that our characters display. Sometimes, however, you might want to use something new, or simply check your character is behaving in the right way, and this book will help you to do that.

Remember also, that the interpretation of body language must be set within a context or situation, that there may be cultural or ethnic differences, and that body language is relative to age and gender. Body language can also be extended to include:

How we position our bodies;
Our closeness to and the space between us and other people (proxemics), and how this changes;
Our facial expressions;
Our eyes, and how our eyes move and focus;
How we touch ourselves and others (haptics);
How our bodies connect with inanimate objects such as: pens, cigarettes, spectacles, clothes, cups, and so on;
Our breathing, and other less noticeable physical effects such as heartbeat and perspiration;
The pace, pitch, intonation, volume, variation, and pauses, etc., of our voice (para-linguistics).

This book is not meant to be an academic treatise on body language it is an alphabetic list for easy reference by writers – both beginners and the more experienced – to cherry-pick body language for their characters that matches the context and situation.